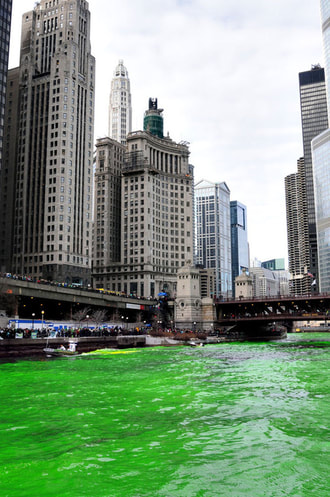 Don't be FOOLED by who dyes the CHICAGO RIVER Green on St. Patrick's Day!!!!
IS IT LEPRECHAUNS OR the
CHICAGO Journeymen PLUMBERS LOCAL 130!!!!!  YOU GUESSED IT.........for almost 60 years

the Chicago Journeymen Plumbers, Local 130 turn the Chicago River green for the St. Patrick's Day Parade celebration. One would ask how this is different from the rest of the year when the river is always a murky shade of green. The difference is both significant and breathtaking because the color green is identical to the greens of Ireland from where it got its name The Emerald Isle.  And yes, all the men & women on the boats are ALL Chicago Plumbers!
In 1961 Stephen Bailey, the Business Manager of Chicago Plumbers Local 130 was approached by one of his plumber's who was wearing some white coveralls, they knew this only because they could see some of the original color. These coveralls had been mostly stained or dyed a perfect shade of green, an Irish green to better describe it. It was when Stephen Bailey asked how the coveralls got this way, that they discovered that the dye used to detect leaks into the river turned green, not just any color green, but the perfect color green.  That's when Mr. Bailey bellowed, call THE MAYOR......we will DYE THE CHICAGO RIVER GREEN!

A TRADITION IS BORN BY CHICAGO PLUMBERS, LOCAL 130

If you were watching this for the first time you would think this is a mistake or a bad joke. You see the dye is orange and its initial color on the surface of the river is orange and you would think to yourself what heathen would do something like this. After a moment or two you then see the true color magically appear.
Two miracles appear that day, the river turns a perfect shade of green something that many other cities have tried but have not been successful at doing, and the second miracle by starting with the color orange giving the impression that river will be orange only to convert the river to that true Irish green. We believe that is where the leprechaun comes in.
As the late Stephen Bailey has said, the road from Chicago to Ireland is marked in green. From the Chicago River to the Illinois River, then to the Mississippi, up the Gulf Stream and across the Atlantic you can see the beautiful green enter the Irish Sea, clearly marking the way from Chicago to Ireland.

Where and When
Chicago Plumbers Local 130 will be dyeing the River Green at 9:00am, Saturday March 13, 2021.  Best views from Upper Wacker Drive between Columbus and Wabash.

Take pictures of the Plumbers Dyeing the River Green!!!  Send your best photos into michele@chicagostpatricksdayparade.org for a chance to WIN a Limited Edition T-Shirt!  We will post the winning photo on our WEBSITE!

Please note:  Businesses on the Riverwalk will not open until 11am.  All stairwells leading to the lower riverwalk will be closed per the City of Chicago.