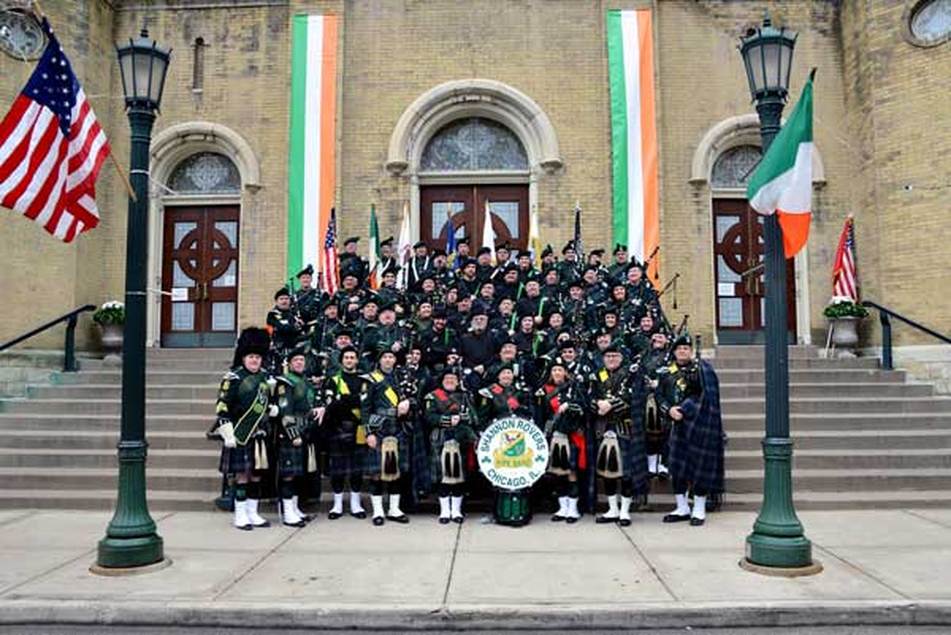 Where and When
The Parade always occurs on a Saturday. If St. Patrick's Day does not fall on a Saturday, the Parade is held the Saturday before.

The next Parade IS, Saturday, March 14, 2020. PLEASE JOIN US AS THE PARADE STEPS OFF at noon. The Parade will be broadcast LIVE this year by ABC-Channel 7 at 12noon.


Jim Coyne, Business Manager of Plumbers Local 130 UA & the General Chairman of the St. Patrick's Day Parade would like to personally invite all of Chicago to join us on Parade Day~Saturday March 14, 2020!

Parade Route
The parade starts at Balbo and Columbus. The parade units will proceed north on Columbus Drive and the viewing stand will be located in front of Buckingham Fountain.

Dyeing the Chicago River - (Time and Location subject to change)
Scheduled for 9:00 am, Saturday March 14, 2020 the dyeing can be best viewed from, upper and lower Wacker Drive between Michigan Avenue and Columbus Drive.

Parking Information
For Handicapped parking needs, your best bet may be the underground parking below Grant Park, enter on Columbus at Randolph. There is parking at the Hilton located at Balbo and Michigan, one block from start of parade.

There is additional parking at Navy Pier which places you about a half mile from the parade route.

Parking near Randolph places you nicely between the river dyeing and the parade route.

Parking fees can range from $20.00 to $60.00 depending on the lot. We do not have specific pricing information. These prices are estimates only. Your costs may vary.

When is the parade?
The Parade always occurs on a Saturday. If St. Patrick's Day does not fall on a Saturday, the Parade is held the Saturday before. The next Parade will be on, Saturday, March 16, 2019. The Parade steps off at noon.

Where can I view the Parade?
~The Parade route begins on the corner of Columbus Drive and Balbo then continues North to Monroe.
~Grandstand Seating can be sponsored in advance on Eventbrite ($40.00 per seat),
~Grandstand Seating is open at 11am, located at approx. Congress and Columbus.

When do they dye the river?
THE CHICAGO PLUMBERS, LOCAL 130 DYE the Chicago River at 9:00 am the day of the Parade.

Where can I see river dyeing?
The best place to see the dyeing is the intersection of Michigan Ave, Wacker Drive and the river.

What is the formula for the dye?
Just like the recipe for Coca Cola, it's a closely guarded secret! But seriously, the formula has been thoroughly tested by independent chemists and has been proven safe for the environment.

Where to stay? Where to eat or drink? Other Irish Events?
IrishAmericanNews.com has many Chicago Based events, places to stay, eat and drink that cater to Irish sensibilities. They also have timely deals just for the Irish!

Who can I EMAIL about being in the parade?
Please see the Menu for information regarding parade participation or email us at: michele@chicagostpatricksdayparade.org.

What if it rains or snows?
Parade cancellation? Never!
Snow, rain or arctic cold, the parade goes on.

Dyeing of the Chicago River 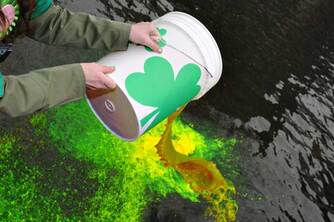 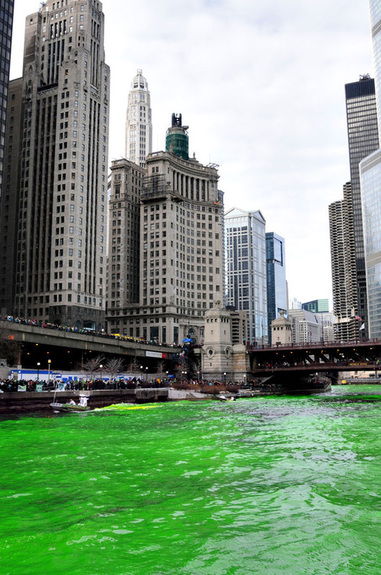 For over 60 years, the Chicago Journeymen Plumbers, LOCAL 130 turn the Chicago River green for the St. Patrick's Day Parade celebration. One would ask how this is different from the rest of the year when the river is always a murky shade of green. The difference is both significant and breathtaking because the color green is identical to the greens of Ireland from where it got its name The Emerald Isle.

In 1961 Stephen Bailey was approached by a plumber who was wearing some white coveralls, they knew this only because they could see some of the original color. These coveralls had been mostly stained or dyed a perfect shade of green, an Irish green to better describe it. It was when Stephen Bailey asked how the coveralls got this way, that they discovered that the dye used to detect leaks into the river turned green, not just any color green, but the perfect color green.

A tradition is born
If you were watching this for the first time you would think this is a mistake or a bad joke. You see the dye is orange and its initial color on the surface of the river is orange and you would think to yourself what heathen would do something like this. After a moment or two you then see the true color magically appear.

Two miracles appear that day, the river turns a perfect shade of green something that many other cities have tried but have not been successful at doing, and the second miracle by starting with the color orange giving the impression that river will be orange only to convert the river to that true Irish green. We believe that is where the leprechaun comes in.

Where and When
This is scheduled for 9:00am, Saturday March 14, 2020 and can be best viewed from the NORTH OR SOUTH SIDE OF UPPER WACKER DR.

Parade participation is by invitation only from the Parade Committee.  We reserve the right to accept and decline ANY applicant/application.

Please send a completed registration form, presented below, to the parade committee. You will be notified if accepted and further instructions will be supplied to you at that time.

Form Instructions Please download, complete and print or save the registration form. The form is in Adobe Acrobat Reader format. Please right click on the link and 'download' the form. Do not simply click on the link as this will display the form in your browser. Certain Acrobat functions, such as saving the the completed form for printing or emailing, will not be available. Download the Adobe Acrobat Reader Application if you can't open the form.